A drawing from Izieu: “Return to home and school”

The exhibition The manuscripts of the extreme presents some documents from the archives of the “colony of refugee children of Herault” in Izieu, given by Mrs. Sabine Zlatin, director of the colony, at the National Library of France in 1994. 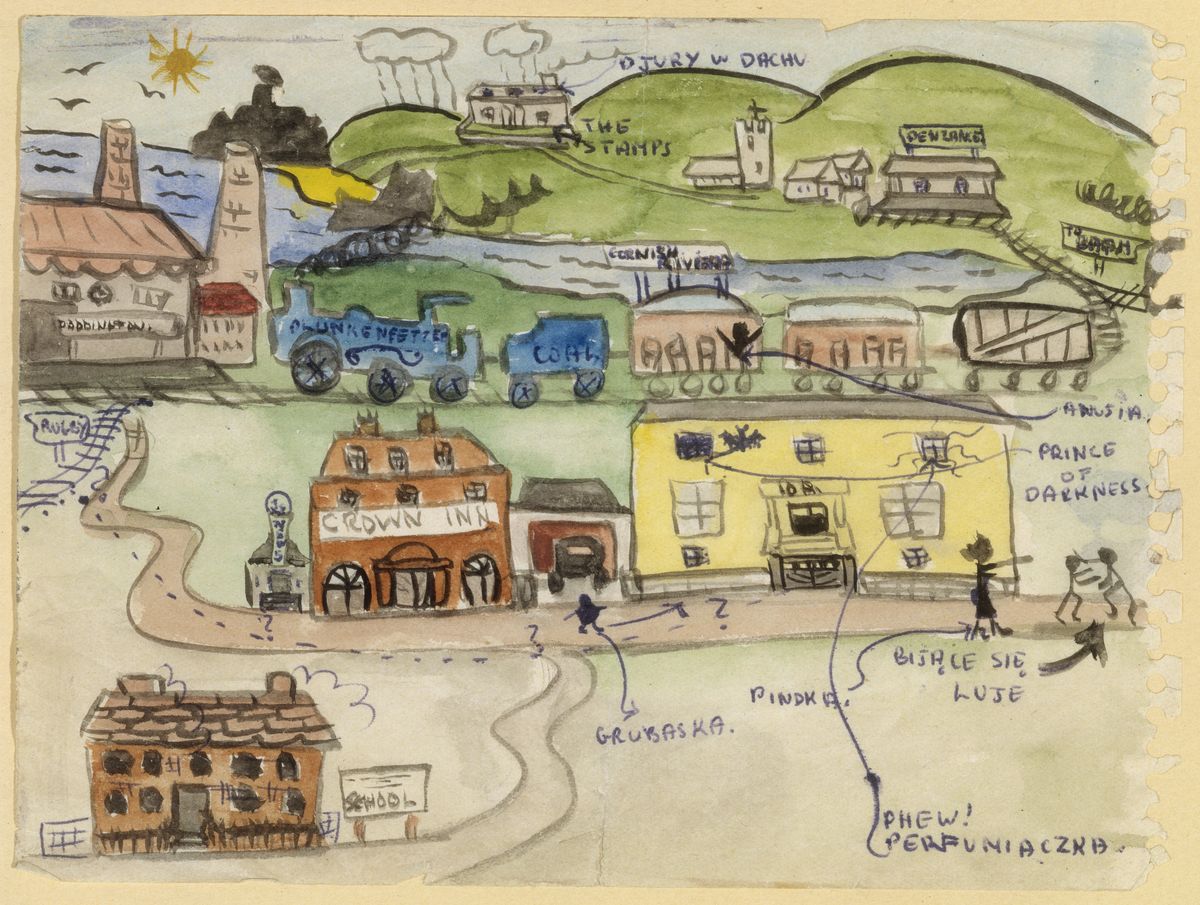 Children of Izieu [anonymous], drawing “Return to home and school”, between 1942 and 1944, Prints and photographs department, BnF © Rights reserved

These records bear witness to her commitment to rescuing children from internment camps for foreign Jews in the southern zone of France, starting in 1942, and the dedication her husband Miron Zlatin and the educators to this cause, first at the home to Palavas-Les-Flots and then at Izieu until April 4, 1944. On this day the forty-four children and seven adults were rounded up by order of Klaus Barbie, imprisoned in Lyon and Drancy before their deportation to Auschwitz or Talinn.
Sabine Zlatin was preparing in the beginning of the year 1944 a dispersion of the colony for April 11th.

The colony had an official existence. Its mission was to welcome and protect children, to ensure a normal and dignified life during their, sometimes temporary, stay before a placement or return to relatives.

The collection contains personal and administrative archives as well as children’s drawings, documents that are incomparably moving because they are directly related to their story or their imagination : illustrated and flowered greetings for birthdays or holidays, adventures among American Indians or at the North Pole, aviation scene, horses, a Puss in Boots.

If some drawings are signed by Jacques Benguigui, Max Tetelbaum, Octave Wermet (Otto Wertheimer) for example, we sometimes lack information to identify the authors or their intentions. It is thus by a letter addressed by the young Joseph Goldberg to his mother, transcribed by Mr. Pierre-Jérôme Biscarat in Izieu, children in the Shoah that we were able to understand the collective process of the creation of the “films” “Ivan Tsaravitch”, “Captain Blood’s treasure”, real films on paper for a cinematographic projection : “We make films. Me, I color them and then another one who draws them we already made aloa with Tarzan, chasing the bandit. Its pretty. A cook made the cinema. It’s good.”

Children do not always worry about signing their work. Some drawings will remain forever anonymous.

The mystery of the drawing Return to home and school

In this set, a drawing seems to harbor a very special mystery, entitled “Return to home and school”… (It is titled on the back and in English). It is a train ride from Penzance (Is the black dome at the end of the yellow beach Saint-Michael’s Mount in Penzance?), along the “Cornish Riviera” (we see in passing the bifurcation for Bath), passing by Paddington Station in London, and leading to Rugby Station, where there is a Crown Inn and a school.

The drawing is that of a child but is also annotated to note the explanations of certain details and comical scenes in a different hand, more assured, in English and Polish, a colloquial Polish.

The person who annotated the drawing made spelling errors, testifying of a more oral than scholarly practice of Polish. For example: the locality “The stamps” (of which we do not know the situation) is annotated “Djury w dachu” (Holes in the roof) instead of “Dziury w dachu”.

From a window of Rugby’s yellow house, “smells” escape: “Phew! Perfumiaczka”: the English onomatopoeia sPhews expresses disgust, and “Perfumiaczka” in Polish designates, in the context of this drawing, a stench.

In the train is represented a little girl “Anusia”, diminutive of Anna, generally addressed to a very small girl. Is it the author of the drawing? Is it a little sister?

We wondered what child had been able to draw a trip to England and who, in his early life, had been able to cross the English Channel and under what circumstances. An English child, a Polish child? What was the meaning of the term “home”? The precision of the representation testified to an incontestable knowledge of the places.

We still did not know about Kindertransport, which allowed between December 1938 and May 1940 the evacuation of about 10,000 Jewish children from Germany, Austria, Czechoslovakia, Poland and Danzig, mainly to England, thanks to the action of the Movement for the Care of Children from Germany (then Refugee Children’s Movement). We learned that a certain Alan Overton, a Christadelphian shopkeeper from Rugby, Warwickshire, had become involved in these relief operations and had founded several homes, including Elpis Lodge in Birmingham, and Little Thorn Lodge in Rugby.

Had the author of the drawing been evacuated to Rugby’s home? Who was he or she?

What circumstances had brought him back to the continent? And to be in Izieu? At what time? Who in Izieu knew his story?

Historians have already given the measure of the Holocaust, the catastrophe, by establishing endless lists of the names of the missing, and survivors. Banished from Nazi Europe, banned from memory, stricken with annihilation, from these people sometimes only remains the names. This memory is the only tribute we can pay them.
Here it is anonymously and tacitly that this drawing tells another face of the unspeakable.

Could someone help to establish the identity of this child?