The donation appeal launched by the BnF for the acquisition of an original edition of Du cote de chez Swann by Marcel Proust is a tremendous success. More than 1,700 donors have joined forces to raise the € 350,000 needed for the acquisition. Thank you for your enthusiasm and generosity !

Written in the first person, the novel is a reflection on literature, memory and time. Due to its influence on future literary works and research, À la recherche du temps perdu is one of the greatest works of world literature.

After being turned down by three publishers, Proust signed a vanity press contract to publish his novel with Bernard Grasset in March 1913. The book was then called Les intermittences du cœur, Le Temps perdu (The Heart’s Intermissions, Lost Time) and divided into three parts. It amounted to 95 galley proof sheets. Deeming the text too long to be published in a single volume, Grasset forced Proust to shorten it. He had to cut the last 25 sheets. The proof stage was instrumental in the creation of this volume: Proust rewrote his text, settled on the names, made corrections and improvements, and continued to hesitate over the famous beginning. The original edition of Du côté de chez Swann was printed from this new version on 8 November 1913.

An original edition of major heritage importance with a paramount dedication

Two copies of the original edition of Du côté de chez Swann have remained particularly famous due to the unique light they shed on the creation of À la recherche du temps perdu.

One contains a letter of dedication to novelist Jacques de Lacretelle, dated 1918, in which Proust describes some of the models he used to invent motifs such as the Combray church and the Vinteuil Sonata. Featured on the list of goods looted from France during the Second World War, this copy has unfortunately since disappeared and has never been found.

The other copy, which the BnF is looking to acquire, features an even older letter of dedication. Eight pages long, it was written in November 1915 to Marie Scheikévitch. The daughter of a Russian lawyer, Marie Scheikévitch was a leading figure in Parisian society and literary circles during the Belle Époque. In 1911, she and Proust became close friends. She played a significant role in the initial reception of Du côté de chez Swann, which she immediately recognised as a masterpiece, putting her influential connections at the service of the novelist. As a result, the press picked up on the publication of the first volume of À la recherche du temps perdu. Proust paid homage to her in Sodome et Gomorrhe with the character of Mme Timoléon d’Amoncourt, a “little, dark lady, extremely pretty”, who is a regular at the Duchesse de Guermantes’s salon and devoted to the cause of literature: “the friend successively – and nothing more than a friend, for her morals were above reproach – and exclusively of every great writer, who gave her all his manuscripts, wrote books for her”. 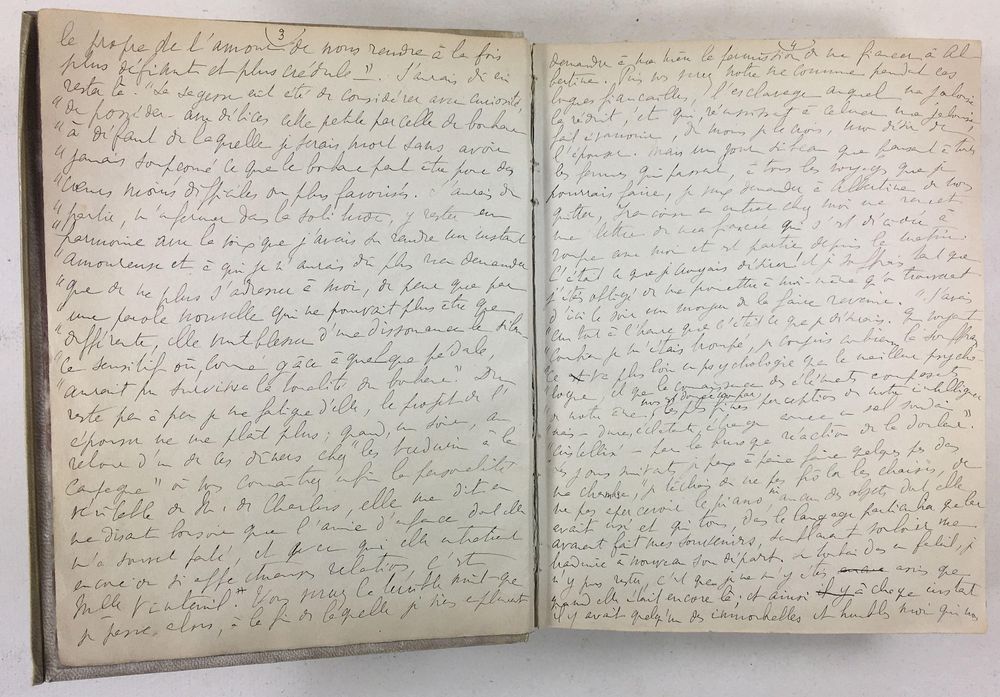 Marie Scheikévitch’s copy of Du côté de chez Swann is from the small first batch of copies to be published: it is one of twelve printed on Holland paper. But its importance is more due to its notable dedication, in which Proust reveals for the first time what will become of many of the characters in Du côté de chez Swann. Drawing on and weaving together chosen fragments from the drafts in his notebooks (now held by the BnF), he lays out and summarises, for his friend alone, something he says “nobody currently knows”, information he explicitly asks her “not to share before the work is published”: Albertine’s full cycle, the material for La Prisonnière and Albertine disparue. Thus, this “paramount dedication”, as Jean-Yves Tadié describes it in his biography of Marcel Proust, occupies a prominent position among the documents reflecting the creation of À la recherche du temps perdu and the construction of its spectacular architecture.

To consult the facsimile and the transcription of the dedication, click on this linkn

Marcel Proust kept all of his manuscripts. When he died in 1922, his brother, Doctor Robert Proust, inherited this invaluable collection and arranged for the posthumous publication of the last three volumes of À la recherche du temps perdu. Upon Robert’s death in 1935, his only daughter, Suzy Mante Proust, took over while encouraging the work of researchers. To ensure the preservation of the documents and share them more widely, she decided to give them to a public institution, which is how the Bibliothèque Nationale gained the Proust collection in 1962.
At the time, it consisted of almost all of the writer’s manuscripts, from his documents from school, early work (Les Plaisirs et les Jours (Pleasures of Days) and Jean Santeuil), critiques and translation of Ruskin’s work to the manuscripts for À la recherche du temps perdu. Three new acquisitions in 1977, 1984 and 2013 rounded off this prestigious collection.

The collection also features a certain number of special printed copies, remarkable due to the information they provide about the development of the novel or the history of the printing process: like the copies of the luxury edition of À l’ombre des jeunes filles en fleurs enriched with corrected galley proofs and the copy of Côté de Guermantes, acquired in 2008, which is dedicated to the Comtesse de Chevigné, who was one of the inspirations for the character of the Duchesse de Guermantes.

Irreplaceable evidence from the creation of the À la recherche du temps perdu, these documents are exceptional due to their wealth and the quality of the information they hold on the creative literary process of one of the greatest writers of the twentieth century.

The copy of Du côté de chez Swann dedicated to Marie Scheikévitch would make an outstanding contribution to this major heritage collection in the history of French literature.

To find out more about Marcel Proust